Your late husband was a reclusive scientist who spent his life obsessively working on a secret project in the basement of your home. Now he's gone, and all that he's left behind is an old computer containing a cryptic note for you.

Unthinkable is a real time strategy game and science fiction horror narrative. Explore the files your husband left behind to reveal the dark secret behind his work that he's kept from you for your entire lives.

Type help to view command line commands. Drag from one cell to another to spread infection. Drag from a cell to the 'purge' or 'mutate' icons to purge a cell or mutate a vine. Use spacebar to pause gameplay and plan your next move.

Difficulty spikes way too much around sample11, not fun when the story is engaging.

i need to preface by saying first that in many years of playing games on itchio, i have always wanted to leave comments on games i enjoyed, but never got around to making an account

but now i'm creating a throwaway for the first time just to comment here, because i absolutely MUST tell you how much i LOVED LOVED LOVED this game. i was hooked, completed the whole thing in 2-3 hours because i had to keep reading until the end to find out what would happen next

SPOILERS BELOW IF YOU HAVENT PLAYED FINISH

so i just happened to stumble across your game, thought it had a cool title and synopsis and decided to give it a try. at first when the game loaded i just sat there waiting wondering why there's this 3-decade old screen in the game window LOL like i thought "is this some emulator that didn't load properly?" then i tried typing something then ok help and opened the first .txt HAHAHA

(ok but i suggest u delete the "drag from one cell... plan your next move" sentences under instructions, as those are introduced in the game itself and it may spoil plot a bit if read before starting the game?)

anyway first shit your storytelling. just, HOW?? how did you come up with such a beautiful, amazing, convulted, romance/horror/thriller/RTS game combining a top tier short story with actually damn interesting unique and difficult gameplay? i tried to poke holes into Richard's narration and your plot but came up with nothing. was thinking "why not let the girl die" but realised he was probably thinking of getting caught and making Anna feel horrible after knowing, and how the writing digresses regularly to reflect Richard's personality. are you like Shakespeare back from the dead (with some fungi in his head) or something??

and that plot twist at the end holy shit just when i thought "yeah this wild ride of a story is coming to a close" you broke my neck with the whiplash of oh HEY RICH KINDA MURDERED ANNA. and how you weaved in the explanations of destroying evidence and not being able to put the latest variant directly inside Lisa, wow i feel like some high school literature teacher gushing about all this (i swear i am not HAHA). fuck this entire thing felt so disgusting yet intimate and all sorts of emotions really, my only question is what happens to Lisa when fake-Anna dies? but that ending note and him looking forward to see Anna in the afterlife GOSH IM SOBBING AAAAAAAAAAAAAAAA

reading the intro and end of this made me feel like i really am Anna sitting in some old basement with an old box desktop looking through all this. i can really just imagine the scene, some light dust on the floor... also how you narrated the breakdown of their relationship that was honestly so heartbreaking (and it was mostly implied!! your writing is that good??). i love the old computer OS format too, that is so incredibly unique and makes me feel like I'm going through some 200-year-old diary (but in electronic form), it really pairs nicely with the deceased feel. this medium was really so perfect for your storytelling (also perfect), like FF7 meets Cask of Amontillado.

and the gameplay: are the third/fourth/fifth colours meant to represent the powder and white blood cells and so on? i liked how it was abstract but also supported the plot a bit, differing in the map and so on based on what was happening in the story. altho i spent 5 minutes trying to click the first level before realising that you had to grow the vine from the ends of the chain HAHA oops

damn i love you thank you so much for this. i am gonna go let the emotional fallout from playing this mess up my next few days (hopefully no nightmares)! i hope you're doing well, is there some way i can give you some $$ maybe a kofi or something?

... also you know, naughty dog or square enix (or something) are probably hiring scriptwriters

oh YES DO YOU WANNA EDIT AND PUBLISH THIS AS SOME SHORT STORY?? i would buy it immediately on the spot, this is way too good to be locked behind a 2 hour game session I WANNA REREAD IT ONCE IN A WHILE

right i loved Rich's self denial even though he knew most likely that his fears/suspicions were true! and all that foreshadowing...

the way you've spun this all to max out the thriller part really adds to the horror and disgust, not like tension before a jump scare, but like failing some big exams which is a nightmare that can't be woken up from, just keeps going and going, trapped in it with the reality pressing in, i LOVE IT

This was a really nice comment to read, thanks for posting it! This game didn't end up getting a ton of engagement, so its super fun to hear that someone played and enjoyed it this much.

I've thought about posting the story on its own somewhere, but to be honest I don't really know where I would. If you'd like to extract the story to read later, you can copy and paste it from the source code (right click the canvas and select 'inspect' The whole story is inside TextFiles.js, or you can just enter kTextFiles on the js console. It will take some formatting, but feel free to copy/paste it to a doc if you'd like to read it again later. I did work with a game publisher for a chunk of 2019 to create a sequel, but unfortunately had a spat of bad health and had to drop the project. Maybe it'll come someday in the future :)

To answer your question, the other colors are meant to represent the pressures Rich applied to the colonies he tested in order to pressure them into mutating - bacteria, other fungal colonies, or the immune systems of his test subjects.

yea you really deserve so much more feedback and engagement, like how are there not more comments and stars?? i really did love it so much, brilliant and mindblowing storytelling

if you don't mind publishing it for free, you can try putting it as an original work in archiveofourown.org? maybe add some tags (authors usually put trigger warnings in tags), then in your author's note you can explain how you edited the story from your original game (link it too!) (as i don't think a raw copy paste may be suitable). if people like it there, i am confident you'll get lots of support!

id love to see the sequel so much! as i wrote above, is there some way i can support you? it's not every day i find a game so amazing that makes me want to voluntarily open my wallet HAHHAHA

This is so cool! 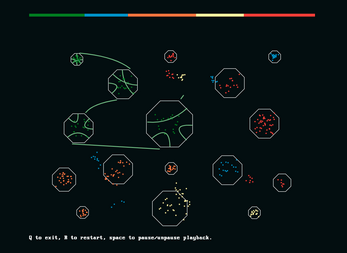